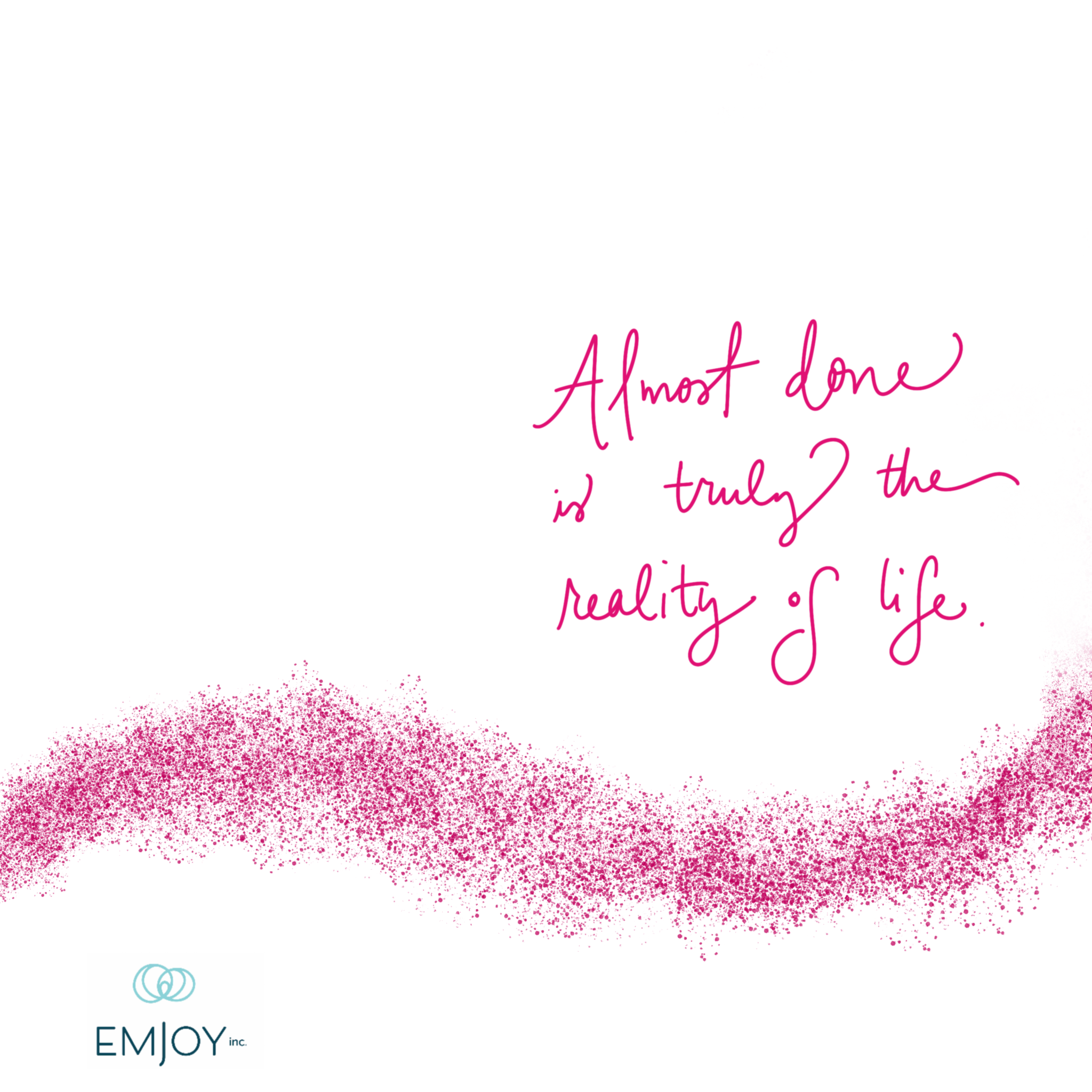 I’ve pursued it again and again in my life. Gone after it casually, aggressively, doggedly, quietly, loudly, half-assedly, and determinedly. I’ve set myself toward it joyfully, gleefully, numbly, passionately, begrudgingly, grumbling, grinning and gasping.

The feeling of it: being done.

The sensation of it: sweet accomplishment. Fiery Finality. Savory Success and satisfaction.

Are we ever really done with anything?

I’ve recently decided whole idea of done is dumb. In fact, Done as an idea has so many perfectly round holes in it, it might as well be a colander.

There’s no such thing as done.

I realized this the other day as I shared with a good friend the trials, inconveniences and concerns and neverending tasks I had taken on as a result of a home improvement project my husband and I had recently launched in our now chaotically configured home. (Dishes in family room, cutting boards in dining room, formal glasswear in the rec room and dining room chairs stacked beside the fire place, floors stripped to concrete in half the house and the persistent and allusive smell of cabinet refinishing pervading the house.)

“I get one thing done, and then there’s another thing waiting for me,” I told her. “And once one little project gets finished, there’s the fallout that project caused waiting for me. So it is ever really done? It’s never done!”

I added the last part with a chortle of laughter, indicating a twist of humor. As the phrase left my lips, it’s truth settled on me.

She agreed, and explained how she had spent a Saturday painting a worn out Adirondack chair to a brand new shade of crisp blue, getting it all done and realizing once it was complete and the chairs were back in use, that she’d missed a sizable portion of the bottom part of one of the legs.

Almost Done is really the reality of life.

Are you ever truly done with a home improvement project? Done cleaning up the backyard? Done tidying up the kitchen? Done picking up dog poo? How long does “done” last in your home? In my home, with two kids, a dog and a husband, any cleaning activity can only be considered done on the best of days for maybe 20 minutes before it becomes undone again and requiring doing.

Done with a book? Done with a movie? Perhaps in page count or minutes, but does your mind often wonder what might be happening next in the characters lives? Do you find yourself waiting for the sequel? Registering for the pre-order list for the next book? Watching it or reading it again and again?

Even the most definitive things are really Almost Done or Mostly Done. Taxes are done? Sure, but you’ve already begun accruing the tax documents, data and spending for next tax year. So part of them are done, and part are just getting ready for you to do again.

Raising kids is done? Not really. Even if they’ve left your home and are living stable, independent lives, your role in their life as their parent is not over. No matter how old they get, they’ll still look to your example, maybe seek your guidance, blame you for the things you got wrong, and appreciate you for the things you got right. And you’ll still be the sappy schlub forever concerned with their health, happiness and safety and wondering if you might have done more.

A career done? Rarely these days. It’s more likely one professional iteration or specific occupation comes to a conclusion while another occupation of your mind, heart and effort begins forming and activating.

Some people may find the idea of never done panic-inducing. Before my big realization, I could really relate to that. The amount of doneness I sought was a strong source of motivation for me. And the temporary hit of achievement high was like strong, rich dark chocolate.

But done addiction is a loop that repeats and repeats and fails to give me what I really want: self-acceptance and self-love for all my flaws and incompleteness.

Since done is not real, I’ve changed the harsh way I judge myself because of all the undone around me.

I have realized that setting my expectations on achieving total done is foolishness. This realization has brought with it a flood of relief. If I am never done, and there is no such thing as done, then what I can focus on (instead of being done) is being Mostly Done, happy with my effort, forgiving of my shortcomings, open to learning and ready for the next evolution or task or wrinkle to appear.

What freedom, to be pursuing Mostly Done. What pleasure it is to seek a state of Almost Done.