The Life We See Through This Screen 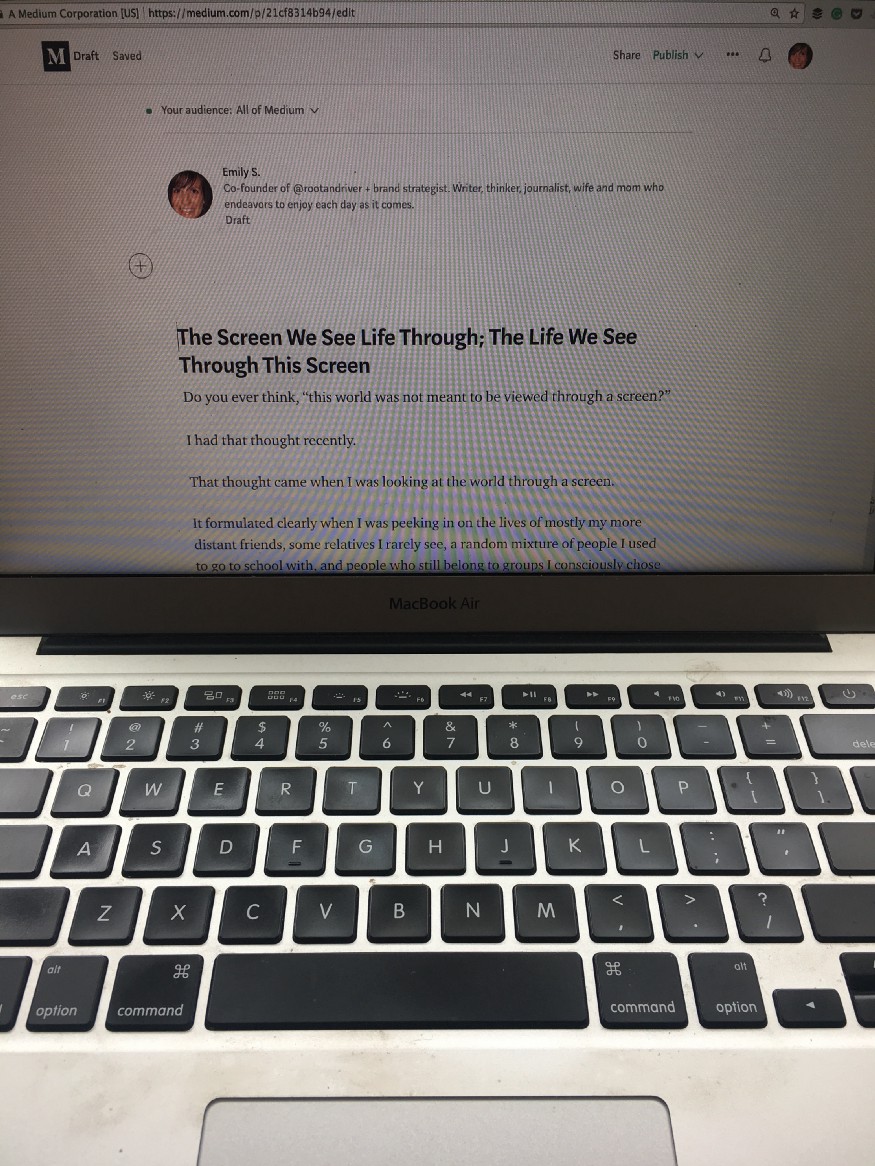 Do you ever think, “this world was not meant to be viewed through a screen?”

I had that thought recently.

That thought came when I was looking at the world through a screen.

It formulated clearly when I was peeking in on the lives of mostly my more distant friends, some relatives I rarely see, a random mixture of people I used to go to school with, and people who still belong to groups I consciously chose to move on from.

Here they were, this band of people I do not have quite enough time or capacity to be intimately connected to, yet who are still connected to me. And I to them.

That connection existing at a level that was impossible just over ten years ago.

And me, still seeing so much of them, offering my — let’s be honest — completely irrelevant positive, negative or neutral energy to their offerings.

Here I am seeing the outer workings of their private lives (silly costume day at work!), family vacations (everyone screaming on Splash Mountain), children’s first photo shoot (were my children really that tiny once?), a not-yet-15-year-old daughter’s first date (so soon?).

But it’s making me, in the moments I spend, feel something.

It’s not something yummy.

It’s not something expansive.

It’s not something inspiring.

This practice of peeking, of seeing a skewed and fractional representation of others’ lives through this screen, have created a sludge in me, have generated an almost palpable slop in my stomach.

In the disorienting 20 minutes I have spent reacting to others’ lives, a sickie-slop has begun rolling in my stomach, which I must now confront, invite in for a visit, and move through.

Because, thankfully, that’s what I’ve learned to do at 40. I’ve learned to invite my undesirable, not adorable and not-remotely-gracious feelings in for a visit. Instead of ignoring them, and sending these feelings on their way unexamined (before they returned in due time), as was my MO for decades.

So, hello, sickie-slop, come on in.

First question: What are you made of? What is this sensation of you truly expressing to me?

Those dozen caustic ingredients (some in double doses) of the sickie-slop seem to win out over the few sweet ingredients, creating this acidic goop in my inner tank.

I’ve spent the last year heartily committed to the idea of worrying less, enjoying life more, forgiving myself and practicing self-love, most lately in the form of fastidious self-compassion.

I work on these practices daily, which means I fail daily, and try again. I am committed to them because in the very short time I have consciously pursued them, they have improved my life and my living so very much.

Inside this space of inner work, I am calmer, happier, more at ease and more connected to the humans around me.

Sometimes I think going to the world through a screen may help in that endeavor.

But often, and maybe with particular screens, they work against all of my effort.

It occurs to me that something created originally with the intention of comparison — comparing co-eds to one another and ranking them as if they were inanimate objects instead of whole humans — may not ever be able to move beyond that original intention.

In my experience, the original intention of things matters — a lot.

The original intention sets in place what a thing’s potential is.

The original intention creates what can be fully realized.

And the other thought: in all of our posting and editing and sharing, there are common connections built. There are oceans crossed, and family held dear, and support given in amazing and powerful ways. That’s so true and lovely.

But there’s also the idea that this world cannot ever be fully conveyed through a screen. (Ever visited a national park and tried to capture its essence through your phone’s camera?) The screen cannot convey the fear a daughter’s first date triggers, the regret of how you spent the hours with her up to now, the wonder and dread of being old enough to have a teenage daughter who dates.

It cannot convey the bitterness of packing up the car to head out of town when you are dead tired and everyone else is asleep.

It cannot convey the quiet pride you feel of having carried a human life inside of you for ten months and the victorious sense of birth, nor can it encompass the slightly sickening weight of now being the one person able and responsible for fully sustaining that life.

It cannot convey the way you worried over your costume being too short, or too long, or covering up too much or showing off that part of your body you haven’t liked since sixth grade when a so-called friend pointed it out to you.

But all of those things are part of the experience. And there’s still about a million realities unspoken, but deeply embedded in what we share.

So maybe, life is really not intended to be viewed by screen.

Like life is the full novel, and the screen is the CliffsNotes version.

Like your heart is the ocean, and the screen is a postcard of the beach.

Like your spirit is the sun, and the screen is the light filter you select.

Like your love is all the languages of the world, and the screen is a word.

Emily has been a writer all her life. She’s also a human woman, wife and mother, founder of EmJoy, Inc. and the co-founder of Root + River. Squawk back or follow @emilyatlarge